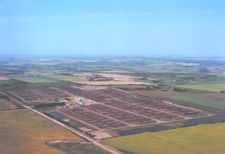 Highland Feeders has grown significantly since its inception in 1983, when the two brothers diversified their grain operation with 50 feeder cattle. In 1994, with an 18,000 head capacity and 16 full time staff, Bern and Mike were named the Western Regional Finalists in Canada for Entrepreneur of the Year. Further recognizing their growth was Profit magazine (June, 1995), listing Highland among Canada's fastest growing companies. The theme of adding value extends well beyond the immediate borders of Highland's business.

A study provided by the Alberta Cattle Feeders Association estimates the local and provincial marginal economic annual impact of Highland Feeders at $11.4 MM and $14.9 MM, respectively (direct purchases of cattle and grain are not included in these benefits). Highland Feeders currently has a standing capacity of 36,000 head and is the sixth largest feedlot in Canada.